James Clayton Inducted Into the Pennsylvania Auctioneer’s Hall of Fame 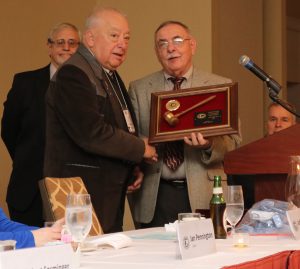 A Conference for Auctioneers?

Yes, that’s right – a conference for Auctioneers! Actually, it was the 72nd Conference of the Pennsylvania Auctioneers Association. One of the largest Auctioneer Associations in the U.S., the Pennsylvania Auctioneers Association (PAA), gathered in Harrisburg PA on January 7th through the 10th to meet, greet and grow their businesses for the 72st year.  The membership of the PAA is made up of auctioneers, trade members, and other auction professionals who are passionate about the auction industry and the auction method of selling.

In attendance were hundreds of auction professionals including auctioneers, apprentices, auction students, support personnel, vendors, and presenters.  All had access to many educational seminars during the course of the event that will allow them to better serve their buyers, sellers and the industry as a whole. E. R. Munro & Co. was the Corporate Registration Sponsor. Other generous conference sponsors included Alderfer Auction, AuctionTime/AuctionFlex, Lancaster Farming News, Sanford Alderfer Real Estate, Shearer Printing & Digital, Auctioneer Software by Spectrum Net Designs, the PAA Central Chapter and United Merchant Processing Association. 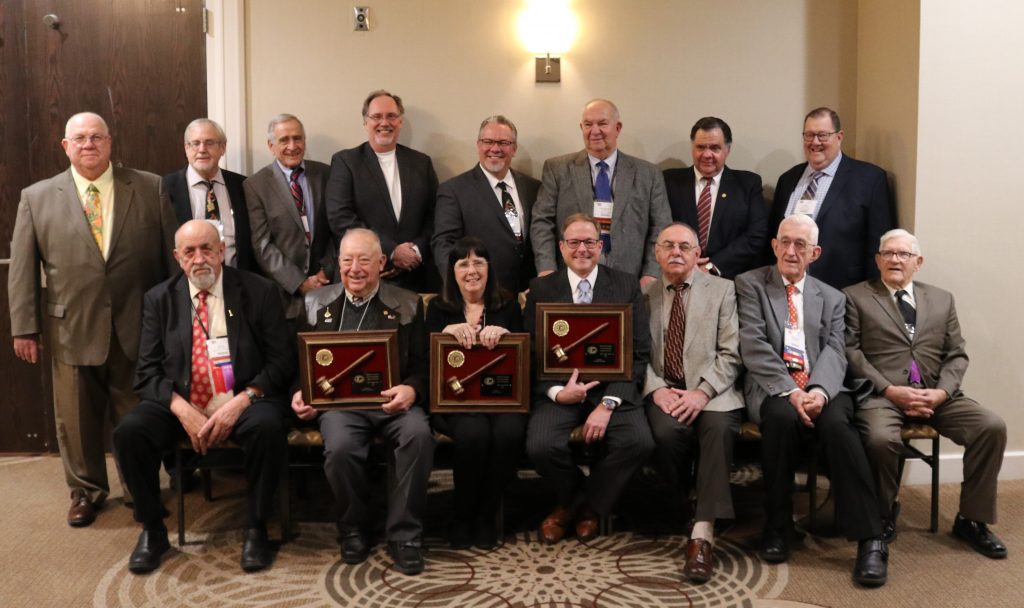 Hall of Fame members in attendance of the 2020 PAA Conference with newly inducted in center.JPG

The PAA annually hosts the PA Auctioneer Competition at the Farm Show Complex during the PA Farm Show.  On Wednesday evening, January 8th, the room was completely packed while auction goers saw the best auctioneers in the state in action.  There were 21 contestants with Ben Svonavec of Somerset PA coming out as the overall Champion. The Runner-up was Brian Burk II of Meshoppen PA.  The Rookie (licensed for under 2 years) was David Gossert of Chambersburg PA and the Top Female Competitor was Kim Douglass of Boyertown PA. Continuation of this competition was made possible by the Exclusive Presenting Sponsor, Manheim Pennsylvania.  In attendance and spectating was their General Manager Joey Hughes. Other sponsors for the competition included GoToAuction.com, Shearer Printing & Digital, Patrick Morgan Auction Services, H.K. Keller, Hostetter Auctioneers and Geyer Real Estate Auctioneers.

Several awards are given out to honor some of those who have dedicated their careers to the industry and who have made the industry better for all.  Three auctioneers were inducted into the PAA Hall of Fame. This award is given to an individual based on integrity, honesty, high moral character, acute fairness, and distinction, and is bestowed on an auctioneer each year who, over the course of his or her profession, has committed him or herself to fostering excellence in the auction industry.  The 2020 Hall of Fame inductees were James Clayton of Waynesboro PA, H. Brent Souder of Hatfield PA, and Linda Lewis of Wyoming PA (only the second female to be inducted into the Hall of Fame).

The recipient of the prestigious award of Auctioneer of the Year was awarded to Thomas Saylor of Felton PA.  The nominations for this award are chosen by auctioneers in his/her area and the winner is selected by his/her state-wide peers.  Mr. Saylor has shown excellent leadership, high ethical standards, willingness to share with others, participation in community affairs, and outstanding contributions to the PAA and the auction profession.

Officers for the Pennsylvania Auctioneers Association for 2020 include: Jeff Pennington, President for the 2nd year, of New Castle; Matt Hostetter, President-Elect, of Beaver Falls; Jamie Shearer, Vice President of Downingtown and Robert A. Ensminger, Treasurer, of Harrisburg.  Patrick Morgan will serve on the PAA Board of Directors as a past president. Kimberly K. Douglass of Boyertown is the Administrator. To find a PAA Auctioneer in your area or to find out more about the association go to www.paauctioneers.org or contact the association at info@paauctioneers.org.

Auctioneer of the Year Award

James Clayton of Waynesburg has been an auctioneer for nearly 42 years. In that time he has served in various posts of the Pennsylvania Auctioneers Association, including president in 2003. The organization recently presented him with its highest honor — the Auctioneer of the Year Award.

Jim Clayton, who has been a auctioneer in Greene County for more that 40 years, examines a piece of glassware at his auction barn in the old Dry Tavern school

Clayton, 61, of Kennel Road, Waynesburg, has been auctioneering since he was 19, practicing a form of salesmanship that dates to 500 B.C. when Herodotus, a Greek historian, wrote about the auctioning of women to serve as wives.

While Clayton’s auctions don’t quite rival those of Herodotusor or Marcus Aurelius, the Roman emperor who sold family furniture at auctions to satisfy debts, they have, nevertheless, caught the attention…

Article from the Observer-Reporter on April 17, 2006

By Dave Zuchowski
For the Herald-Standard

Greene County resident James A. Clayton got interested in auctions when his father and grandfather took him along, at the age of 10 or 11, to the colorful sales made up of bidders and fast-talking auctioneers. He must have been impressed, because in 1965 he got his apprentice license that allowed him to learn the ins and outs of the trade from the pros.

Two years later, he joined their ranks by passing the state test for auctioneers. “You have to know an awful lot about auction law, math and real estate to pass the state exam,” he said.

“Fortunately, I passed the first time I took it. Nowadays, the exam is very difficult to pass, even for some who attend the two approved auction schools in the state, Harrisburg Area Community College and Reading Community College. A lot of people don’t pass the exam on their first try,” said Clayton, 61.

Although some auctioneers make a living with full-time work, Clayton was only 20 when he passed the exam. As a newlywed and family breadwinner, he wanted to have a steady paycheck. So, he became a part-time auctioneer and a full-time histology technician at what now is the Southwest Regional Medical Center in Waynesburg.

Next month, he’ll celebrate his 42nd anniversary on the job in which he prepares “anything removed from a patient during surgery for review by the hospital pathologist.”

As a part-time auctioneer, he’s been actively involved in the trade for 41 years. Since 1985, he’s run an auction house in a Dry Tavern school building, selling mostly household goods, tools and antiques with some real estate and on-site sales thrown in from time to time. Although he’s listed in the yellow pages, advertises in the local newspapers, posts flyers and utilizes the Internet, a lot of his business is word of mouth.

“Everyone seems pleased with my services,” he said. “I start my monthly Saturday auction at 4 p.m. and send the checks out to the consignees on Monday.”

Depending on how much inventory he picks up from sellers in his 16-foot trailer, his Saturday auctions are held once a month, more often if the flow of goods allows it.

Over the years, the most expensive item he’s sold at auction besides real estate and farm equipment was an 8-gallon, antique crock made in Greensboro that went for $18,000. A few weeks ago, a Hepplewhite chest of drawers brought $3,400 at one of his auctions. Prior to that, a hall seat with a built in clock got the bids up to $4,050.

“As an auctioneer, it helps to know a lot about antiques,” he said. “When you’ve been in it as long as I have, you can’t help but learn all sorts of things.”

On Jan. 13, Clayton’s years of service earned him the highest award from his peers – the Auctioneer of the Year Award granted by the Pennsylvania Auctioneers Association.

The award was presented to him at the state auctioneers convention banquet at the Harrisburg Wyndham Hotel. The convention is held annually in conjunction with the Pennsylvania Farm Show.

“Winning the award came as a total surprise to me at the banquet,” said Clayton. “Like the other nominees, I didn’t even know I’d been considered for the award.”

Clayton said he is thankful for receiving the prestigious prize – a large wooden plaque with a brass insert – that he keeps in his office at his home.

Other than a second-place showing in the bid-calling competition in 1986, held at the State Farm Show, the Auctioneer of the Year award is the only one he’s taken home over the years.

In his lengthy career, Clayton has served in all the offices of the Pennsylvania Auctioneers Association, including president in 2003. Currently, he’s pack representative of the 11-county Southwest region.

Clayton resides on a 40-acre, non-working farm near Waynesburg. His son, Jason, a state trooper, and daughter, Joyce, a registered nurse, live nearby. He’s the grandfather of four.

“It’s funny,” he said. “In high school, I took an aptitude test whose results indicated that I’d be fit to be an auctioneer. Looks like they were pretty right on that one.”

Article from the Herald-Standard on May 14th, 2006